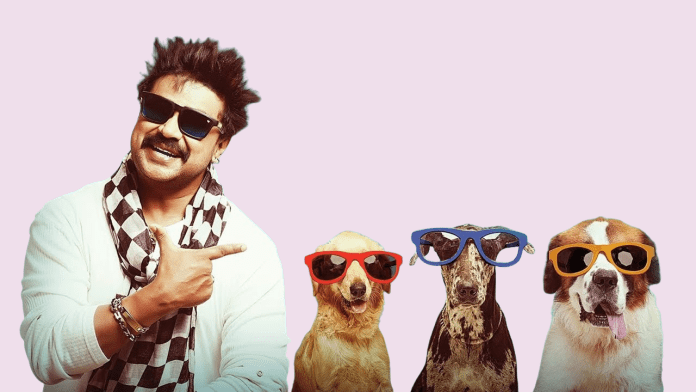 Animals truly amp up the emotional quotient in movies, and this is especially true in the case of dogs. Who hasn’t been moved by Hachiko: A Dog’s Story? Who hasn’t laughed out loud watching Scooby-Doo cartoons? It is hard to mess up a movie with a dog in it. No matter what the plot, if you portray the warmth in a human-dog relationship and add a few cute/adventurous tricks, the movie is sure to be a winner. While elephants are said to be Kerala’s favourite animals to be featured in Malayalam cinema, we’ve had a fair share of dogs in movies with interesting storylines, starting from the 60s. This is an attempt to collate a few.

Directed by P. Subramaniam, this movie featured Madhu and his dog companion Lion. This German Shepherd was the perfect action sidekick and wingman!

Mudramothiram is a movie directed by J. Sasikumar, with actors like Prem Nazir, Jayabharathi, and Shankaradi. The highlight of the movie is the orphaned protagonist Kannan and Raja the dog.

Jimmy, directed by Melattoor Ravi Varma , is an investigative thriller featuring the titular character Jimmy played by a dog. The story revolves around a costly family heirloom, a ring, owned by Jimmy’s master and how people try to get hold of it. The dog trainers from the Police Dog Squad, Mr. Ramachandran & Mr. Thulasi were in lead of the dogs featured in this movie.

Long before the shape-shifter Odiyan graced sliver screen, we had Kummatty, directed by G Aravindan. Winning the Kerala State Film Award for Best Children’s Film, this movie depicts a story from Malabar folklore about a partly mythic and partly real magician called Kummatty. Kummatty turns a group of children into animals and leaves out one of them whom he had turned into a dog to change back. Interesting isn’t it?

A hidden treasure in the forest, a legendary sword and some special action scenes involving humans and animals, Black Mail directed by Crossbelt Mani featured a trained German Shepherd as part of the protagonist’s group of police investigators.

Mrugaya, written by A. K. Lohithadas and directed by I. V. Sasi, is the story of Varunni, a drunkard who comes to a village to kill a man-eating leopard. If you’ve seen the movie, you cannot forget his German Shepherd sidekick, Kaiser.

Directed by Johny Antony, C.I.D. Moosa features one of the most iconic man-animal relationships in Malayalam cinema. With pop culture references made even today, C.I.D. Moosa and Arjun along with Meena and Julie were an instant hit.

This movie, directed by Raffi, is a comedy entertainer about Prince (Dileep) a dog trainer and his dog who acts in a movie with Prince’s ex, who has the same name as the dog. The movie was a family hit with many children becoming fans of Diana the dog.

This film, by Major Ravi, shows the story of Havildar Hareendran who has to stay at the picket with a trained dog named Baccardi. It is a heartwarming affair and stands testimony to the fact that a dog is indeed man’s best friend.

Directed by Mithun Chandra, and starring Mithun Ramesh and Divya Pillai, this movie is all about Jancy’s (Divya Pillai) pet and Jancy’s husband, both named Jimmy, and the dynamics of the house around these three characters.

Producer Vijay Babu is doing something quite unconventional under his Friday Film House banner with a film called Valatty, featuring an all-canine cast. The cast details show Golden Retriever as Tomy, Cocker Spaniel as Amalu, Naadan as Karidas, and Rottweiler as Bruno. Debutant director Devan is at the helm of this project with Vishnu Panicker as the cinematographer.